In the beginning of the year I read on Vogue.com that “2019 is shaping up to be a watershed year” for sustainable fashion. Fast forward to now, just after the SS20 fashion weeks are over and “sustainability” was all the rage all over the runways. And the dovetail with the September 20th Climate Strike underscored this. But what’s just as important as creating clothing sustainably is creating it ethically.

When a fast fashion brand markets a line as a “ Conscious Collection” , whether truly sustainable or not, it’s more than likely not ethical. That’s because it’s virtually impossible to make a profit on a cheap t-shirt without exploiting the workers who have created it. And one of the only ways we can change this as consumers is demanding better for workers. But who are these workers? Ayesha Barenblat, the founder of Remake has made it part of her mission to personally get to know them and through her films give them a platform to share their stories as well as forge connections with student designers –their peers on the other side of the industry.

What Inspired you to focus on the production workers in fashion?
I have spent the last 15 years making fashion a force for good. In all my years of meeting makers, I am awestruck by the hard work and resilience of the women who make our clothes. Yet media paints garment makers as victims far away. I founded Remake to flip the script on this narrative. I wanted the world to re-meet her in the way I see her – as a bad ass feminist, who takes care of her family while working hard in a system that is stacked against her. She is fighting for her rights and curious if the end consumer ever thinks about her. My hope is that seeing ourselves in her narrative will build more empathetic connections and create an uprising of women who want to wear their values and support their sisters at the other end of the supply chain. 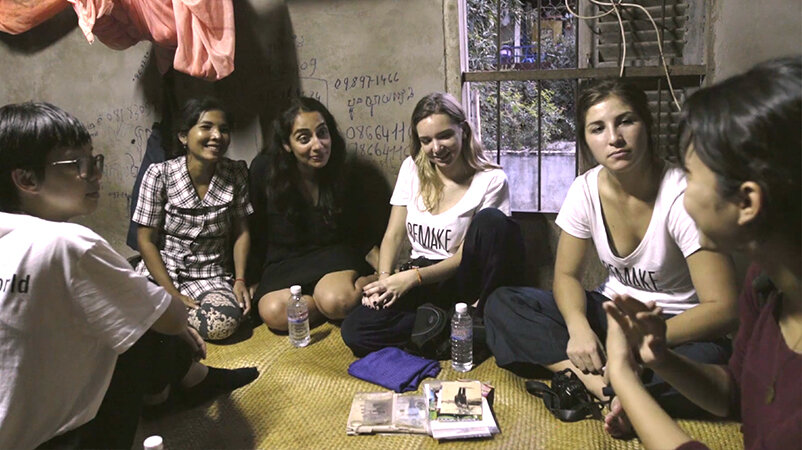 Stills of Ayesha and Parson’s students meeting with the garment workers in Sri Lanka from their documentary. 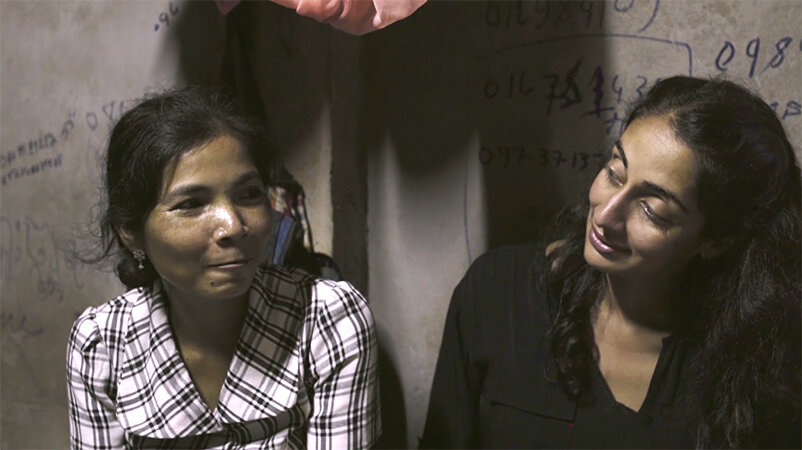 Stills of Ayesha and Parson’s students meeting with the garment workers in Sri Lanka from their documentary.

How did you find factories to tour? Was that problematic?
With years of working inside brands and retailers, I called in favors. To be honest as our Made In Series has gained in popularity it has been harder to get into factories. The fashion industry is nervous because of the transparent light that we are shining. Here is a $3 trillion dollar industry that continues to be built on the oppression of black and brown women who are not making a living wage. The better we have gotten at unmasking the truth, the harder it has been to get into factories.

Did you go into this project with any expectations and if so how were they upended? (or not)
My hope was to get our winning next generation designers and garment makers to connect – on a human level. To break bread. To get to know each other. As I believe seeing mass production and bearing witness to fashion’s impact on people and the planet should be a core part of fashion education. My expectations were surpassed in terms of the bonds that were built. Many of the garment makers had never been asked about their perspectives. The women we met showed up on camera in a way that was so fierce and eloquent. That was unexpected.

I was also humbled by our design students who took the time to meet the makers of our clothes. To do their research and ask such good questions. It was a joy to see them blossom and grow in country.

Is there any woman whose story particularly touched you?
Ashila Niroshi who is featured in Made in Sri Lanka is really close to my heart. She is a former garment maker who sued for back wages and won. As a single mother, now running a boot strapped advocacy non-profit, I was amazed at her riding her motor bike door-to-door, with her two children in tow, to assure that women knew their rights and had the resources to be safe. She is an inspiration.

Have you or the students been able to keep in touch with any of the women you all met? Form more of a relationship?
I have kept in touch with many of the women throughout our journey work – there is Maud in Haiti who often texts me on WhatsAp with photos and messages. When her factory laid her off we helped her land a job at a women’s empowerment NGO. There is Char Wong in Cambodia who sends me occasional photos. In Sri Lanka we’ve helped Ashila with a mix of photo and video advocacy assets, and to unlock funding. We are frequently in touch – particularly after the terrible bombing in Sri Lanka. We call each other sister and I see us as an ally to the important work these women do on the frontlines to advocate for safer and better working conditions. We hope to amplify these voices. These women are the backbone of the industry.

How has it changed your way of being in the world?
I think deeply about what I buy. These deep interactions have changed my relationship to my closet and my wallet. I also bring these stories home not just to press, our design students and our growing conscious consumer community — but to my children, the next generation to be thinking about who and how our clothes come to us. It’s hard to not think about it when you have a face and connection. Getting the world to think about the makers of our clothing is my life’s work – this isn’t just a job, for me this is deeply personal. It’s my life’s work.

While continuing to make these powerful documentaries that share the stories of factory workers and student designers, Remake has expanded to “a community of designers, IG addicts, feminists, storytellers, and all around fashion aficionados, who believe that fashion can be a force for good.” Check out their website to see how you can get involved. 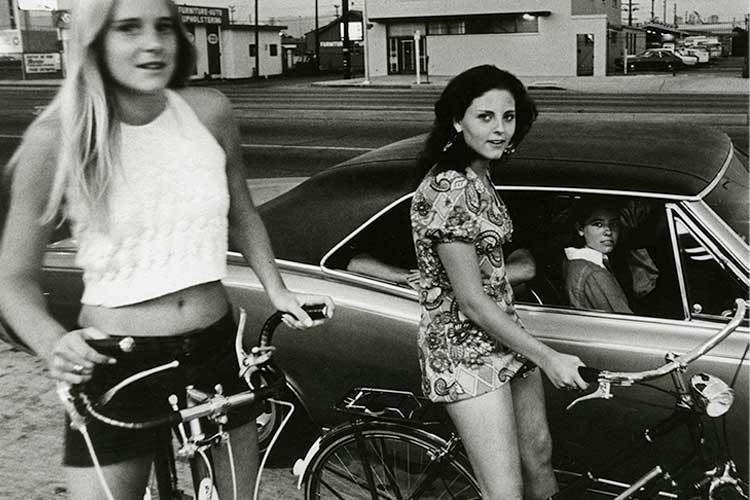 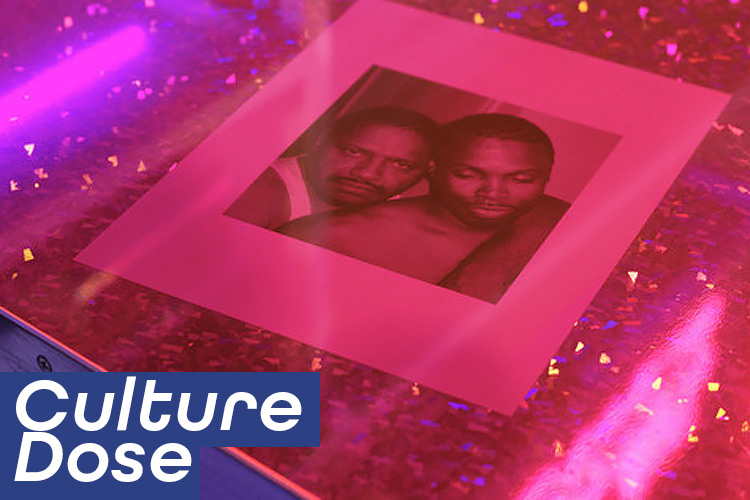 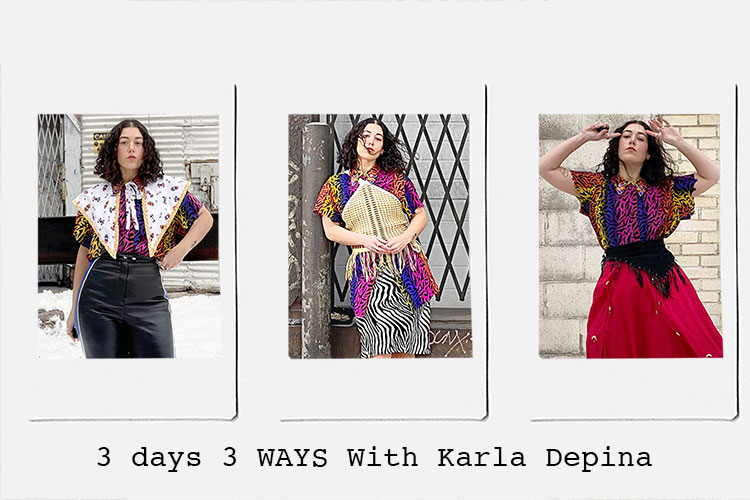 Karla is Giving Us Glitchcore Vibes

Dry January: Four reasons to try it, one reason not to and tips to get through it 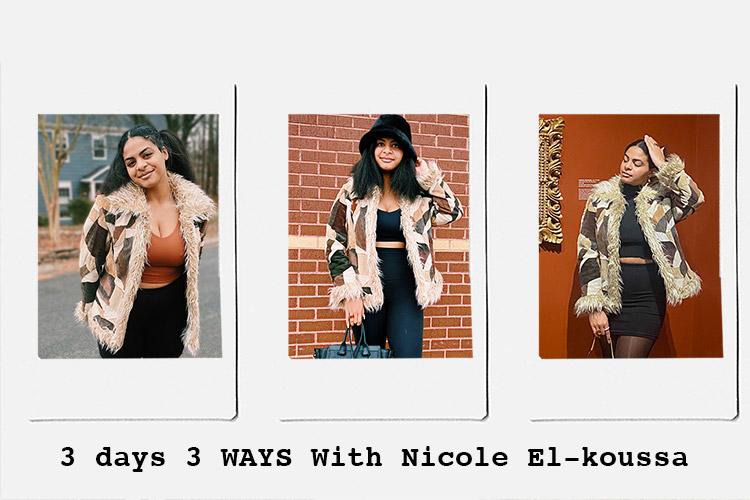 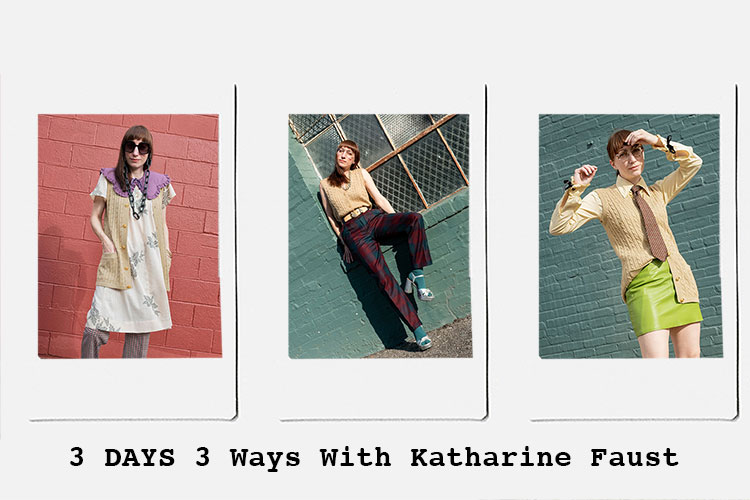 A Grandma Vest Goes Chic! + More ways to style it…

Demand quality not just in the products you buy, b

We're loving this bag from @melkenyc⁣ ⁣ Their

#ICYMI our last Culture Dose featured a "Go See In

Kicking up our heels because it's "le weekend"!⁣

Resharing because it's worth remembering: you don'