A lot of people have followers on social media. Very few of them have managed to create “on the ground” community from them. But this is exactly what Shannon Downey has done – and continues to do. It started with her account @badasscrossstitch where she shares sharp and sassy observations via cross stitch. She is not alone in this – there are other cross stitchers we know and love like Timo Rissanen and Sarah Corbett. What is unique about Shannon is how she has been able to take her online following to create a real community offline as well. It began with her facilitating stitch ups in her Chicago area.

It went to a whole ‘nother level when she asked for help on Instagram to complete a project and was flooded with responses within minutes. This in turn garnered press (the whole story is below!) and she is now preparing for a national tour to meet everyone who helped her, have stitch up/meet ups and foster community. In her own words she is: an artist, craftivist, community builder, and general instigator who blends politics, activism, and art into projects that are designed to inspire others to take action, think, discuss, engage with democracy and their community, and find some digital/analog balance to boot!

Read the interview, be inspired and consider donating to her gofundme to support her work.

So, craftivism cross stitching…how did that start?
I was in digital marketing and was connected to a device 24/7 and was becoming super burned out. One day I was on Etsy and saw a Captain Picard (of Star Trek) cross stitch pattern. I’m obsessed with Captain Picard and thought it was hysterical and a funny application of cross stitch. In 5th grade I learned cross stitch and made a pink bunny and was like, This is stupid I’m never doing this again!

But this was Captain Picard so I thought, this is funny and I need something to do with my hands. Let me buy this and make this and see how I feel.

So I did and the minute I was done I knew making things with my hands was the answer to this burn out. So I started stitching every day to help my brain but after a couple of times doing other people’s stuff I was like eh..that was fun now I’m ready to do it on my own.

That very quickly turned into using it in line with my activism and using it to create space for myself to really think about things and spend time reflecting on issues. For example gun violence…

Cross stitch created a space to think about things and then Instagram was a place for sharing those pieces and what I thought about while I was making them. And that’s where everything really grew.

How quickly did @badasscrossstitch grow? Were you surprised?
It started to grow at a nice clip. I started putting things on there, people started to find me I started to find other stitchers and connected with them, and I was at a comfortable 15,000 followers and thought, this is so cool, I can’t believe this is working and it was no big deal.

And then I made the boys will be boys piece. Honestly I made that about Trump when the Access Hollywood video came out and I was so self-satisfied! I was at home drinking wine and stitching that shit like “uh uh mother fucker…you’re never gonna be President!”

Ohhh ouch!
Yeah, that (the election) was a tragedy. But what’s funny is later when the Harvey Weinstein scandal first broke, a male celebrity somehow found that piece and shared it and then every celebrity on the planet grabbed it and shared it and it was interesting because it was this moment where the piece went viral.

and that led to him messaging all the celebrities and saying tag this woman, my bad I am sorry… and all this reciprocal tagging happened and that led to a different conversation about crediting artists and not erasing people from their work on the internet. So it was a double whammy of virality and that’s when my numbers really jumped. Now  they go through these weird sparks where a piece that’s been dead for a while, somebody will pick it up and it will go viral again and it just keeps happening. On my end there is no intention behind it and there’s no predictability whatsoever. 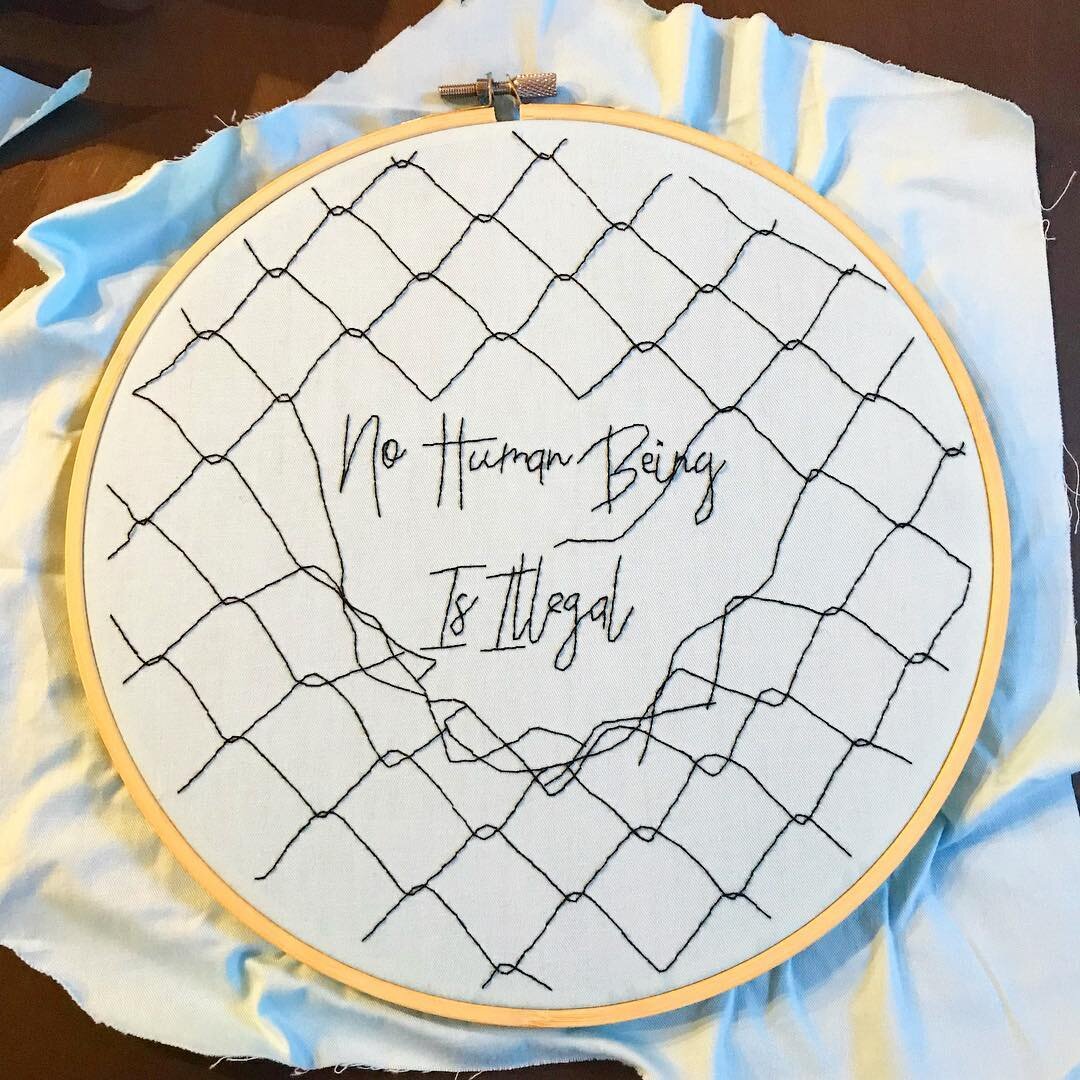 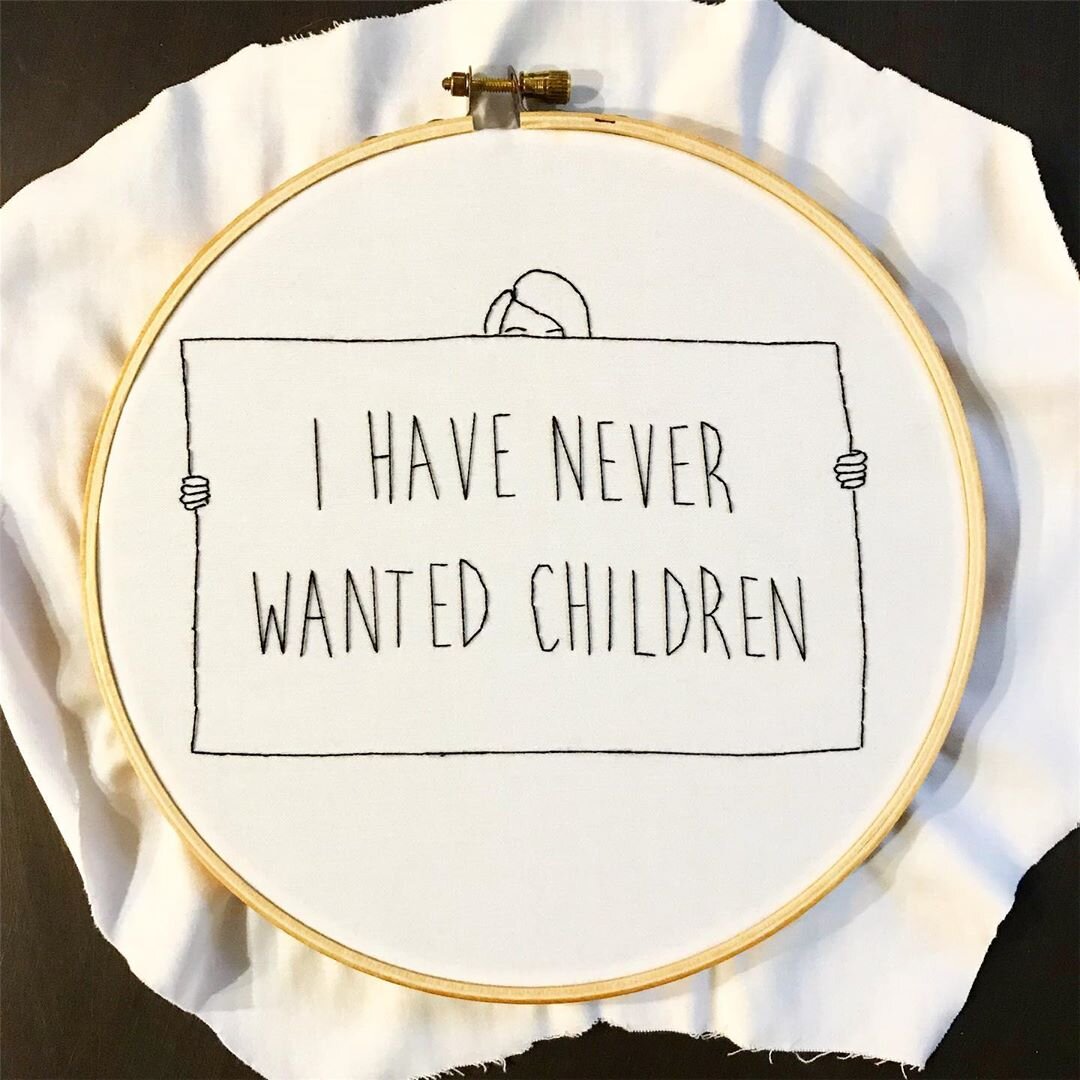 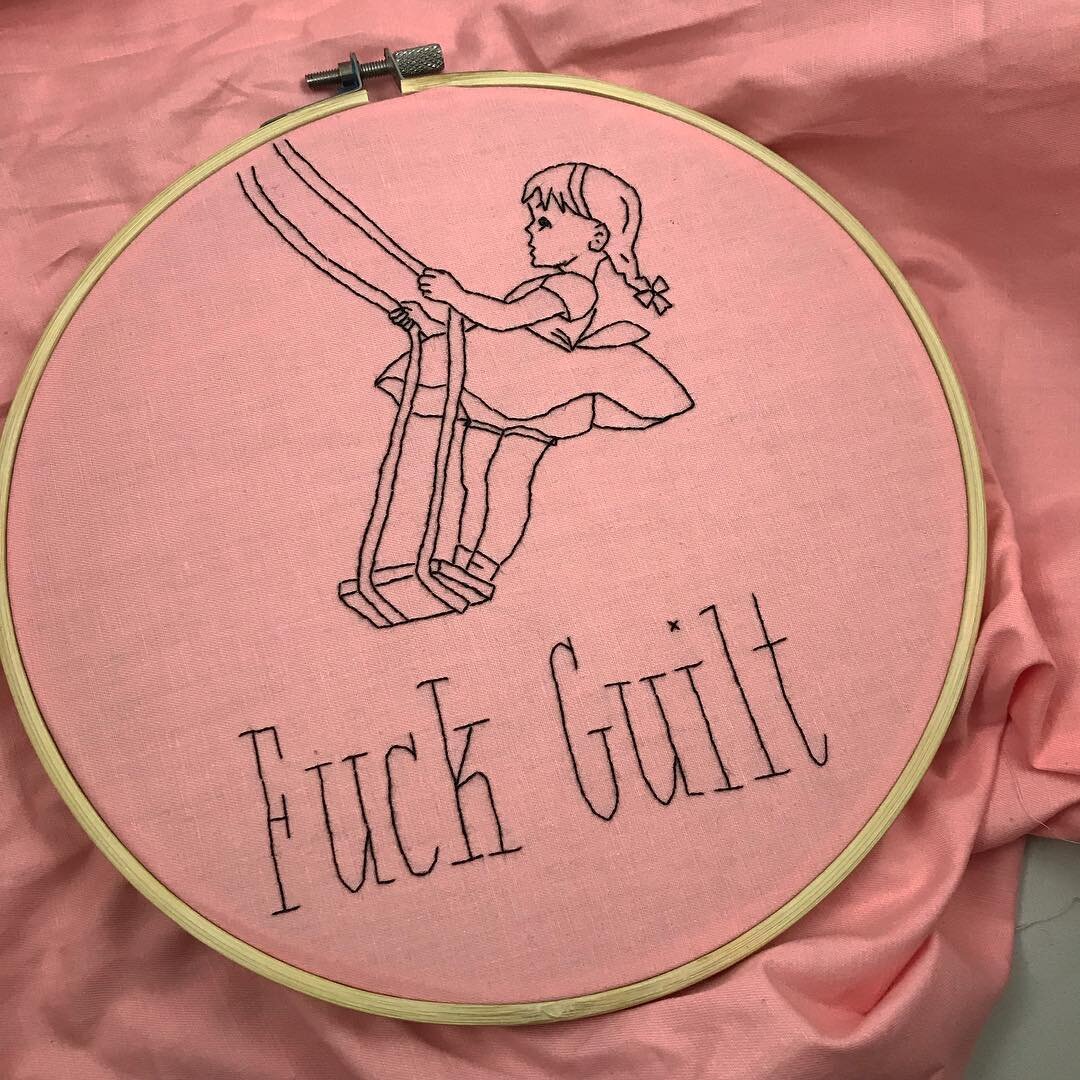 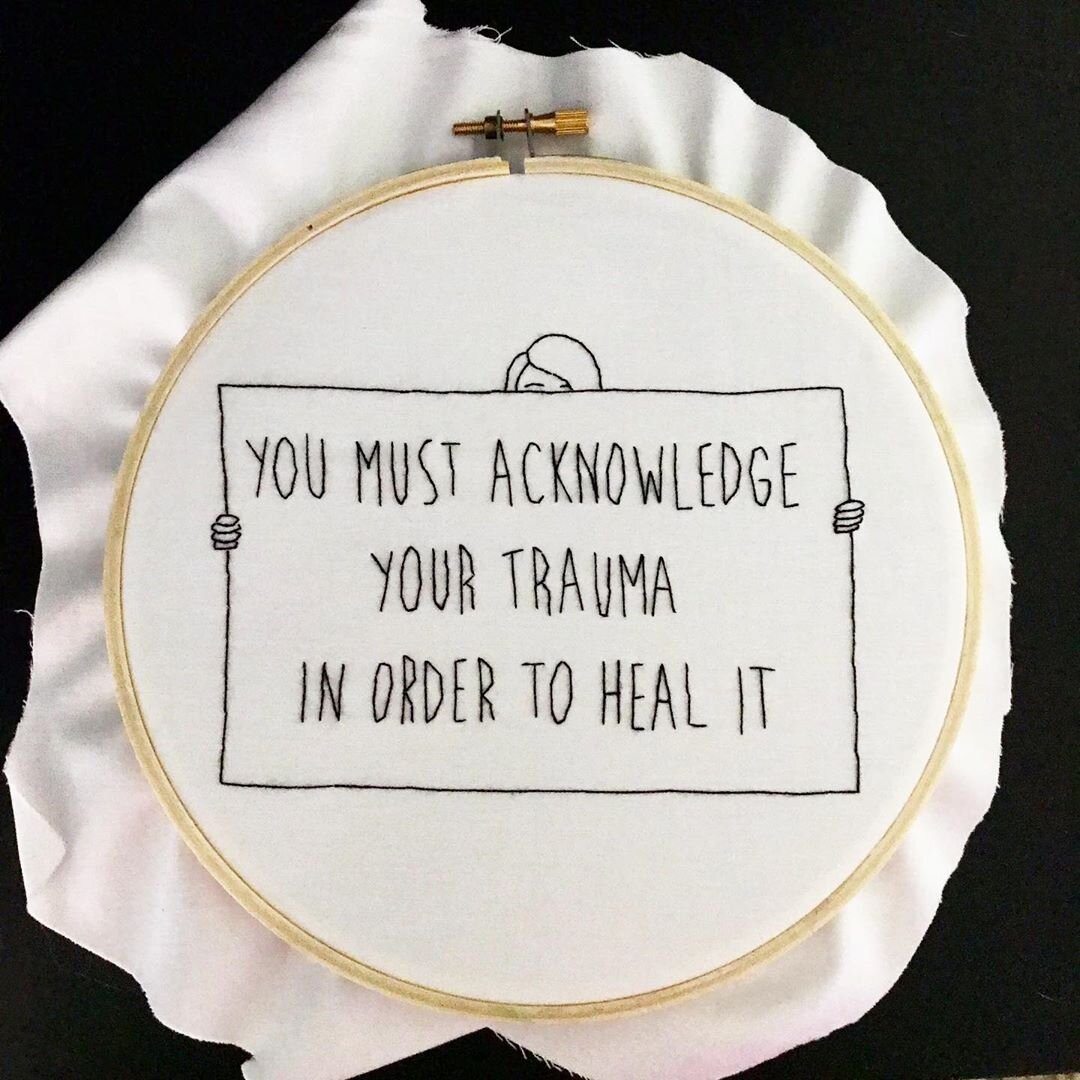 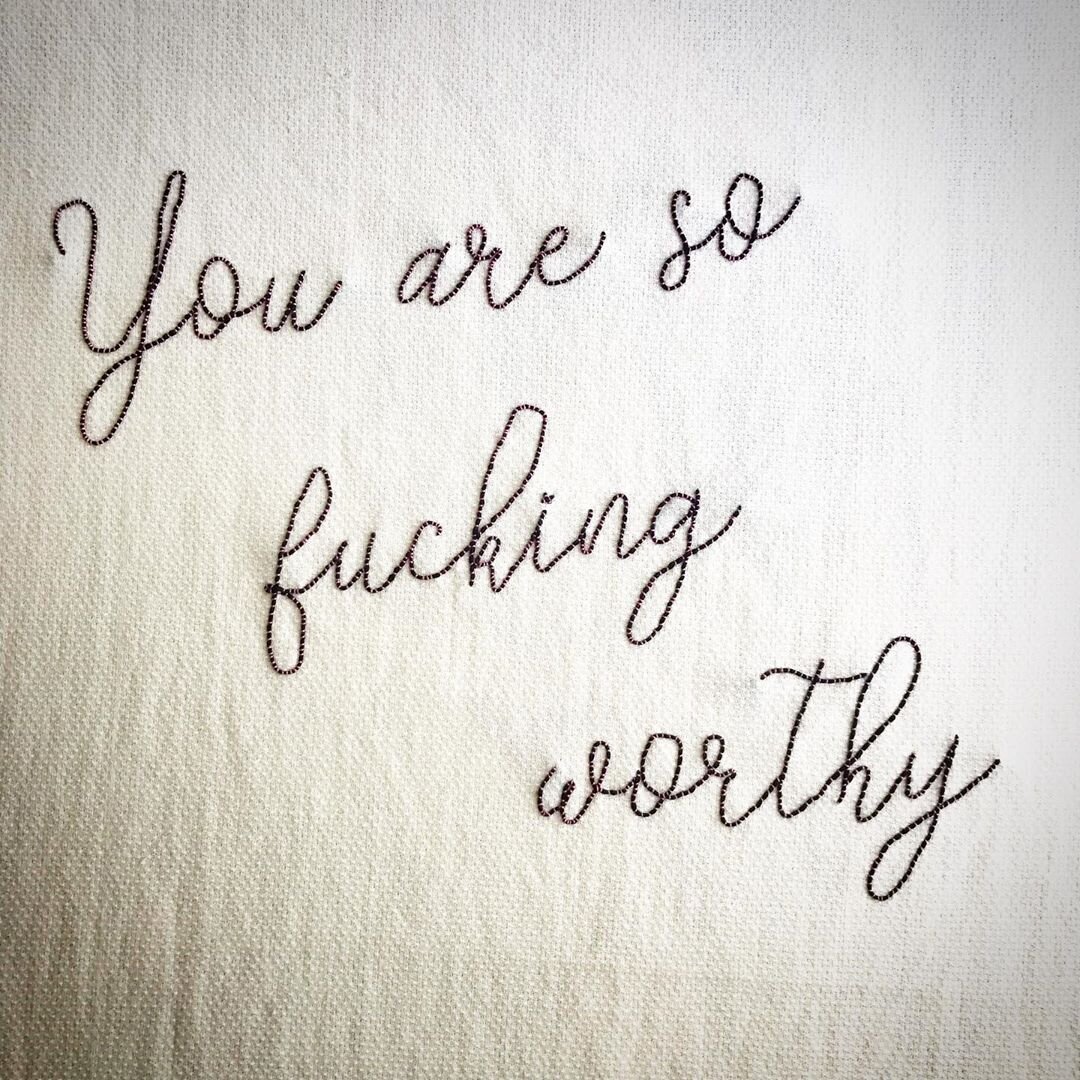 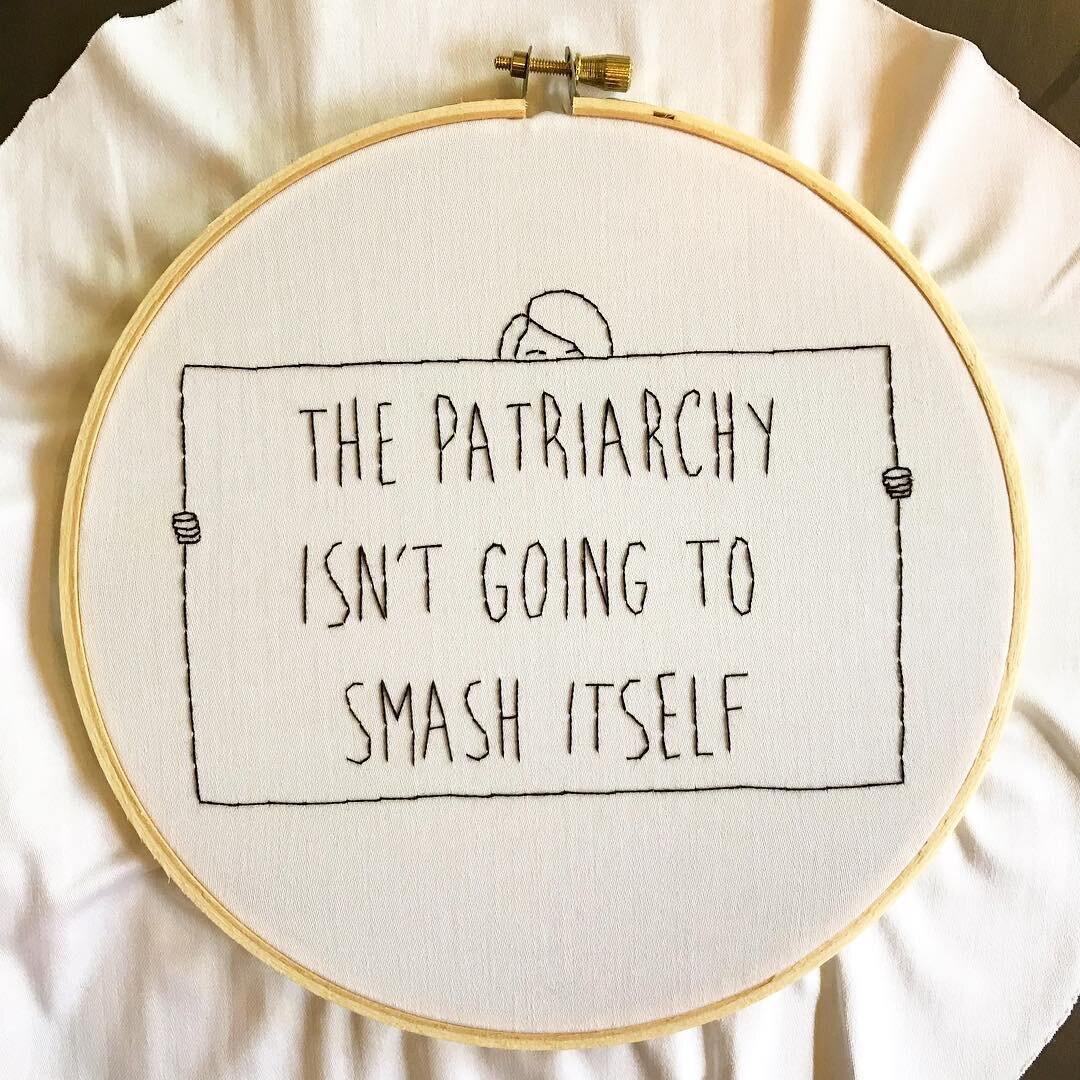 Let’s talk about The Quilt. That project was a departure from your usual craftivist work, right? Tell us about this project – how it happened.
I like to go estate sale shopping and find unfinished projects and feel compelled to finish them. They’re always stuff I’d never want, like bible quotes and cats and “home sweet home”. This one, was a map of the US with every state square prepared but unfinished by a woman named Rita who had recently died at age 99 … I had to get it yet at the same time I was like I’m not spending six years of my life on this! So on Instagram I was like “Anybody want to help me?”

Yeah, I saw that post and people had already responded and I was like ahhh, damn it.
I just could not believe the response. Within 10 minutes there were hundreds of people! I was like, Are they serious are they going to do this? That first email I said “Look if we don’t move projects like this really quickly they lose momentum and I need it back by November 15th, so if you can’t do it let me know now and no hard feelings” and only 3 people couldn’t. It was astounding.

That was all happening on Instagram it was just my Insta community. One day I thought –I never shared this on Twitter. I bet Twitter would like this– and I made a Twitter thread and in minutes it went viral and that was the moment that every press outlet on the planet found me. I was glad I waited, because we were deep in it at that point when the press started calling –so there was something to show.

I feel like the press from the quilt took you mainstream -all those morning shows.
Totally. I was like Kelly Clarkson has a show? ok I’ll go on it.

The thing with this quilt… while it’s sooo different from your other/political work, I think the response shows a need or desire for community.
1000 percent. I do these stitch-ups all the time where I get people together where we hang out and I teach you how to stitch and we have conversations around a topic. They are magic. Every fucking time. Super magical and I realized: This is the answer. Community building is the answer. 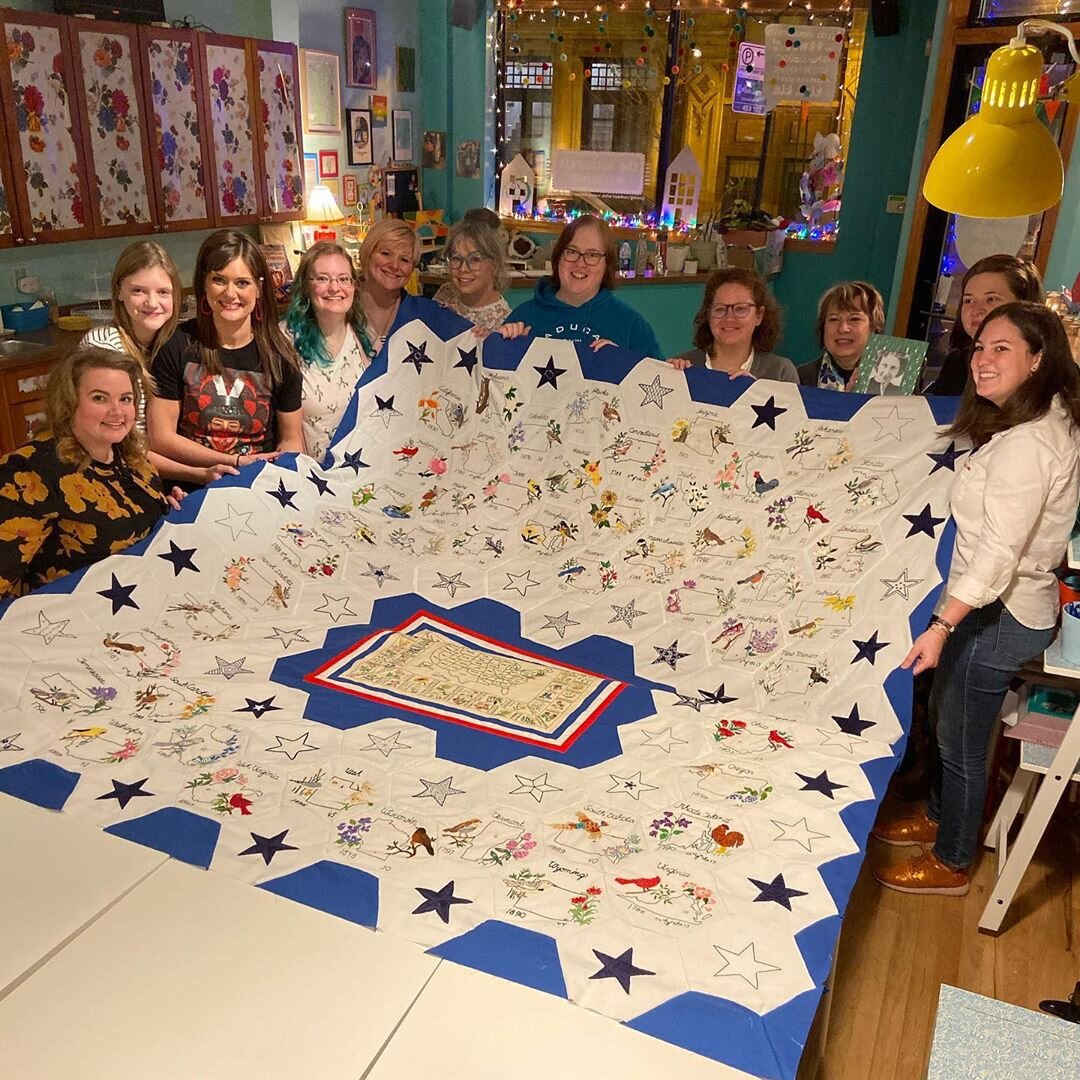 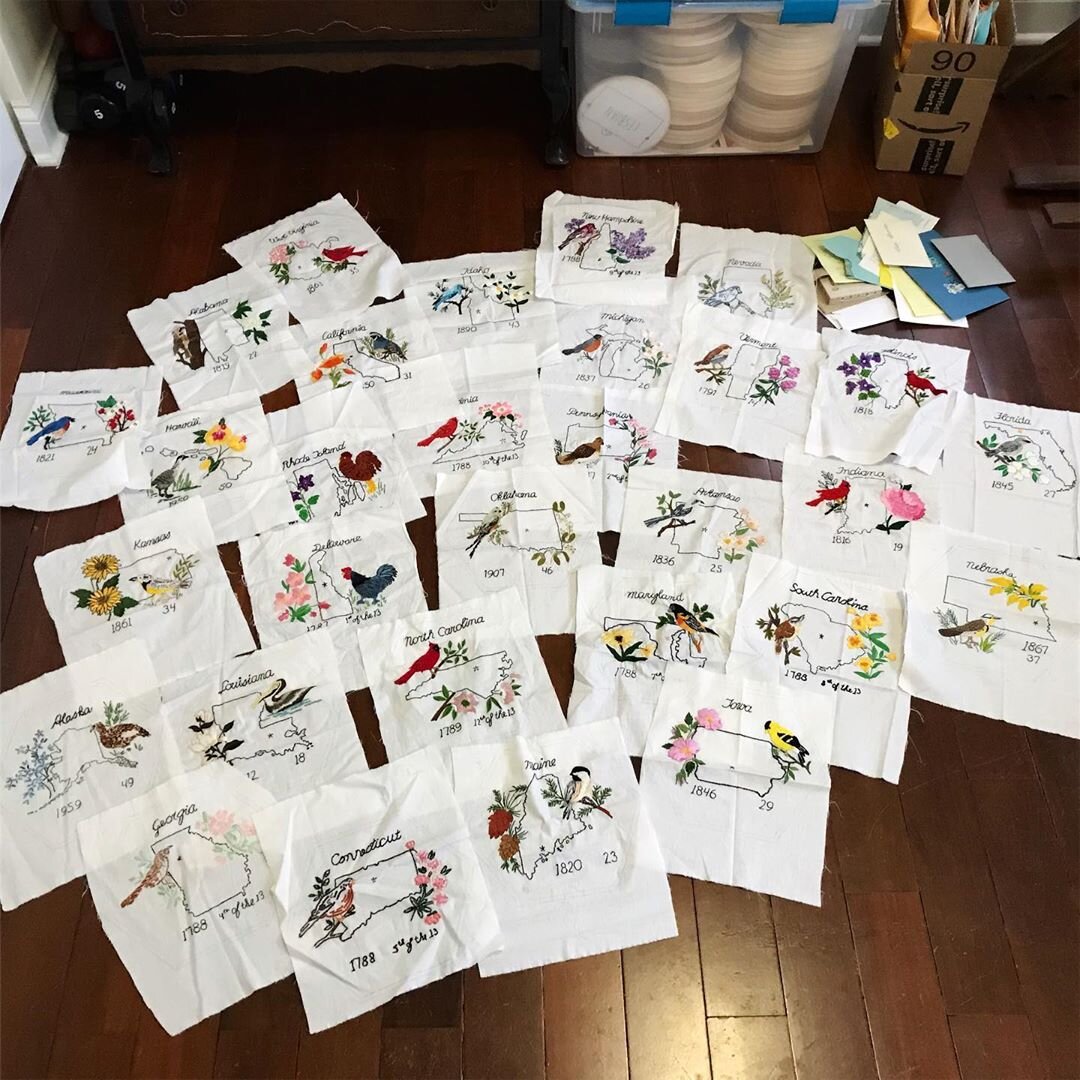 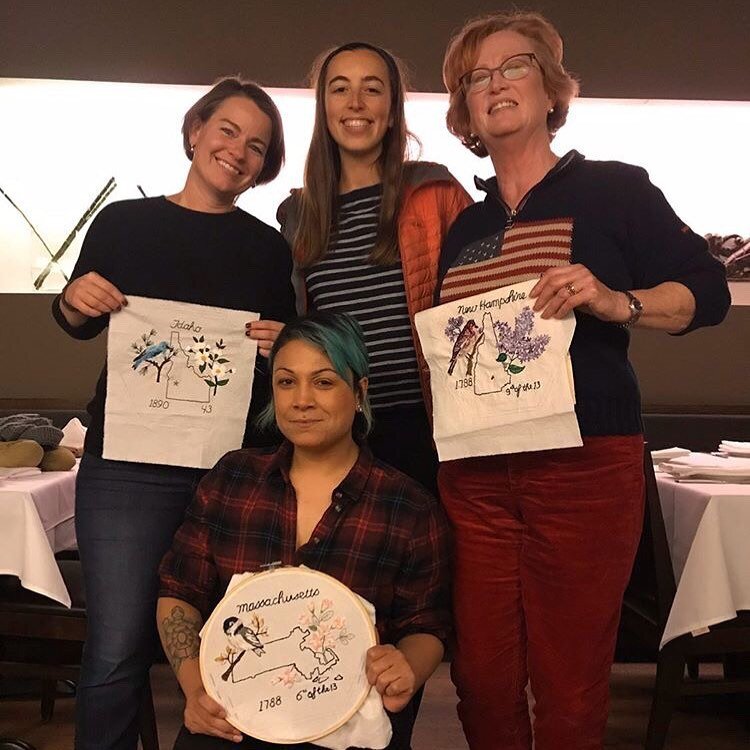 And it cracked me up that the quilt became that thing (community building) because of all the things that I do I’m like ”Its a fucking quilt of the US!” I mean, I don’t quilt, we’re literally stitching borders… there’s so much to it that’s so not me, and yet I think that’s the thing that brought it mainstream and that’s the thing that enabled me to be seen and heard by people who would never see or hear anything I had to say. I mean they might see it but they’re not listening.

But everybody loves these quilts so much because they came to it with their different stories. The mainstream media distilled it down to “Nice ladies on the internet finishing an American quilt for a dead lady!”

Right! (laughs)
At first I was really annoyed by that so when I’m talking to the press I was saying “this is a political and feminist act and here’s why…” And I was bringing up that this is a uniquely Americana quilt and we should be having a conversation about what patriotism actually is, a critique. And the press was like “Yeah… so these nice ladies on the internet…”

and I was like damn it! Every time. But now I’m super grateful for it because so many people are here and they’re coming to this and I have an invite from literally every quilt guild in the US to bring Rita’s quilt and to speak.

That’s amazing!
Yes, and it’s been interesting because I‘ve realized the quilt world is the most racist place I’ve ever been. I had no idea. And now that I’m in this space I’m like “Y’all need some work! This is bad. This is worse than I thought it could be!” But I have these invites to these quilting guilds and other events and I began wondering, how do we use this as a moment to actually do some re-educating? So I’ve been working with the Social Justice Sewing Academy and Lisa who runs @blackwomenstitch and has a podcast called Stitch Please,

Social Justice Sewing Academy was started by Sara Trail. She’s a 24 year old black woman and has been in the quilt world her whole life and is always surrounded by white women. With the SJSA she works with young people in urban settings and they work on lessons around social justice and that is the content of their quilting. And their work is freaking astounding.  We collaborated to have the young people make a quilt about their lived experience in the US – what their version of a patriotic quilt might look like, and have this contrast.

And we can historically contextualize it- the time between Rita’s quilt, which is a biennial quilt in the height of patriotic Americana, and these young people’s lived experiences in the US right now ­- what does that look like? When I go to the quilting guilds I won’t even tell people that the second quilt is coming. I’m bringing Rita’s quilt, but this one is coming too. My narrative is this juxtaposition. There’s a real chance that the second half of all of my speaking engagement are going to get cancelled as a result of this, but let’s fucking try it!

Love that!
So talk to me about the tour. This is what your raising money for on gofundme…
The tour… I love travel, I love people, I want to meet every person that I’m friends with on Instagram, I want to hang out with them, I love the RV life, so I thought: let’s do this.

What’s the plan?
I want to bring the quilt to all the people that stitched on it so that they can show it off to their community. Everybody’s so excited about it so I thought, how about I just bring it to you, you can have it, we’ll have a little show and you can show it to all your people. Then we’ll have a stitch up, and you’re the epicenter of this community and I’ll bounce and you keep it going…

I love this conceptually…
Me too…I’m trying to hit every state. The woman who is my stitcher from Birmingham, Alabama was like “I know you probably won’t come to Alabama but we really do have good people.” I was like “I’m coming don’t worry”, she was like “OMG nobody ever comes to Alabama.” But I am. I’m going to Alabama!

Shannon’s going to Alabama and every other state to bring craftivism and community -and of course, Rita’s quilt! Consider supporting her via this link